Guateng, 4th January 2019
The PAC calls for a complete overhaul of the current system and the establishment of an Africanist socialist and democratic education and training system which fosters values of unity, sharing, loving and builds the African personality.
PAC Secretary General, Apa Pooe commenting at a media briefing said, " The killer problem is the obsession with grade 12 results, which hides serious questions about our education system. The current spectacle where learners are promoted to higher grades without justification, hides the real substantive problems in the education system"
The PAC believes that all statitistcs should include all learners that started grade one twelve years ago. The majority of learners - 700,000 - are out of the sytem by grade 10. This means that we make the foundation phase less important and this is a precursor to grade 12 failure. The current reporting neglects incentivizing teachers in resourceless and poverty stricken areas. With no access to Sub-frameworks in the NQF those not admitted to universities have no place to go.
The majority of our learners suffer because the Government has failed to build colleges that cater to the majority. Far too few colleges offer qualifications above NQF level 4.
Further information
admin@pacofazania.org.za 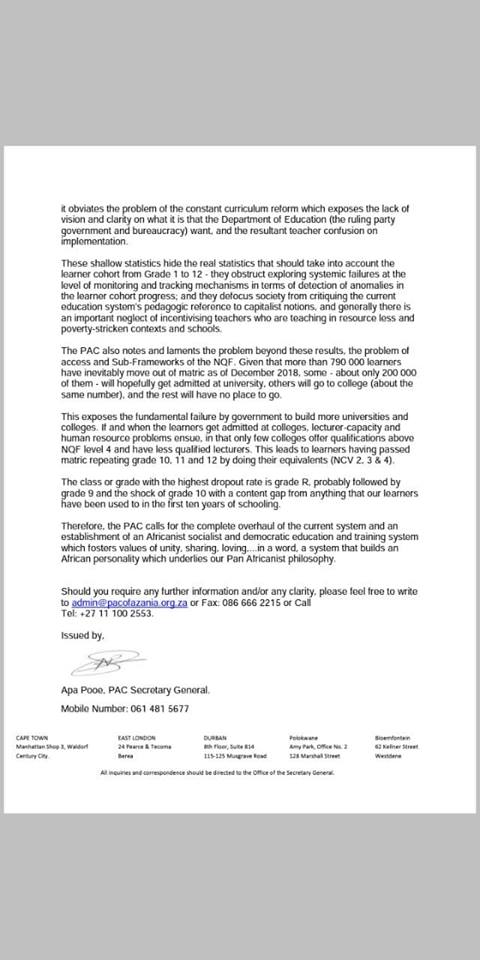 Since 1996 Leadership quarrels have dogged the PAC. A fair assessment of the situation can be found at WikiPedia

The constitution, created as a founding document for a liberation movement, has not moved easily into the 21st century.

There are two main factions (Mphahlele and Mbinda), with calls for fresh election and new nominees (Makoti), with more likely to follow. Resolving this impasse is difficult as any attempts to do so are thwarted by the opposing factions. Each faction simply "denies" the support of the other.

Rank and file members of the PAC should press their favorite representatives to strive for peace and unity and lobby for an online decisions and voting system. By getting such a solution we can gain the moral high ground in Africa.  Makoti has already joined. I will do my bit to get Mphahlele and Apa Poe to join PAC Online. Please could interested members lobby for the support of Mbinda, Xaba, Dlamini, Bennet and Moloto.

The PAC is bigger than individuals.

Elections are inevitable. Branches should continue to develop and keep campaigning. Factions cannot avoid the decision of a self financed majority. This is a numbers game. In the last National Election The PAC received 37,000 votes. By inference we can estimate the active members in both factions to be around 3,000.The election machine of the PAC is woeful. I get labelled  as a white supremacist when I describe it as "natives drumming in the bush".

PAC ONLINE can solve the Leadership impasse. By example we can get around the current electoral process which is hampered by geographic distance. With a superior logistics and a superior funding model it should not be long before our branches are the dominant branches in voting numbers and in finances. We will set up an online polling and voting system that will be the envy of other parties and will enable us to get quick unanimous decisions.

Once we have the numbers the leaders will work for us rather than the other way around.

Advantages to be gained with PAC Online

By focusing on Online we attract a new category of Voter.

The PAC can gain substantially by making it the easiest party to join and lead. Whereas other parties exclude new comers though a heap of red tape. We should make it easier.

Currently many Africans are deprived of voting. A good example is Zimbabweans  living in South Africa (Around R 3 Million), they can neither vote in SA or practically vote in Zimbabwe. They are able to attain membership and leadership roles in PAC Africa and can begin immediately to help develop a Pan African Liberation. 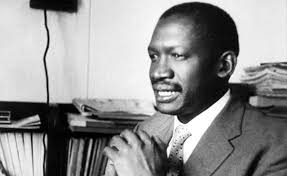